I usually don’t rant on this blog because there’s enough negative stuff in life as it is. However, the results of the referendum held this weekend in France are so disappointing that I can’t help but SHOUT MY FRUSTRATION !!!

This country just massively voted against it’s own interests and for all the wrong reasons. Partly out of protest, partly out of fear, they have voted against a constitution designed by a frenchman (ex-president Valéry Giscard d’Estaing) with French interests and values at it’s core. Talk about shooting yourself in the foot. It’s totally ludicrous !!!

Chirac has made another historic blunder in calling this referendum (he could easily have passed the constitution in parliament). He will be remembered in history as someone who managed to have a very long political career while making one massive mistake after another. Thank God, he’s 72 and can’t last much longer. This man is, and has always been, a disaster for France. The only thing he ever cared for is his own political survival and interests and this at the expense of an entire generation who has had to live through the mess he has created time and time again.

As for all the countries out there who have been confronted with French arrogance and high-mindedness (i.e. almost every country in the world) : have yourselves a field day because it doesn’t get better then this. There is no end to the ridicule that can and should be piled on the French voters and their political leaders who have just given the entire planet an object lesson in stupidity.

Some weeks ago, while listening to the intro of a podcast about the Nikon D70, I discovered this charming new singer called Circe Link and was very pleased to find both albums available on the french iTunes store. I listened to the samples and promptly bought both.

This girl has a very nice voice which she uses to great effect singing blues, jazz, rock and country all mixed together. It made me think of Norah Jones… Two great songs that I really liked are her version of the old Ozzy song No more Tears and Blue Bird Tattoo. My suggestion : take Circe for a spin 😉 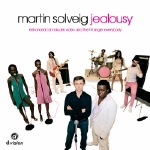 Sometimes you hear a song and it sticks immediately. You can’t get rid of it. It just keeps banging around in your head. Disco seems to do this to me more than other styles of music. Famous DJ Martin Solveig has just released one of those “neo-disco” hits : Jealousy. Catchy bass, chorists, zoom effects, funky guitar : find me the disco ball !!! I’m stuck with this cheap piece in my mind but at least I can dance to it 😉