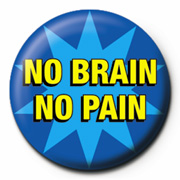 I just discovered while tinkering with Movable Type that it was impossible to post comments to this site. Shock ! Horror ! Massive disappointment ! Now I understand why there were no comments. I thought I had the world’s most boring site and that nobody bothered commenting but now I feel like I might have lost thousands of valid, passionate and interesting insights ;-)) Anyway, it’s fixed so please feel free to use it to comment as much as you like (or else I have no further excuse, this blog must really be boring). 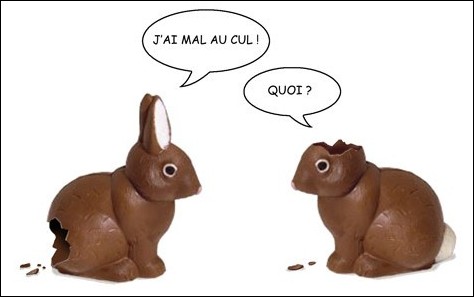 I was cleaning up my email when I stumbled upon this joke that my sister sent me before Easter. I’ll translate :

I’ll ask you all to be forgiving this once. I mean, look at the time of this post. It might help you understand 😉

We have all been confronted with the various “benefits” of outsourcing in this era of globalization. We have had Indian operators answer the phones on various call center tasks and most of our tee shirts and baseball caps are now made in China. We have benefited from this as consumers (cheap goods and services) while we have been questioning this as workers (will my job be next to go?). This is the subject that Thomas Friedman has explained so well in his excellent book: The World Is Flat

The next new thing: Crowdsourcing. Wired, in a typically excellent article, defines it as “The new pool of cheap labor: everyday people using their spare cycles to create content, solve problems, even do corporate R & D ». These spare cycles are even less expensive than the low cost corporations of India or China since what’s being sold is something that had no exploited value before. This is again a new way in which the web monetizes society. Welcome to more of Web 2.0 !

Jeff Howe, the author of the Wired article, has devoted a blog to this subject : crowdsourcing.com. 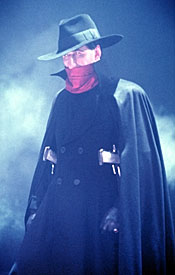 Glamorous locales (from New York to Egypt, from Tibet to Paris), strange adventures (mummies, monsters, cannibal tribes) happening in the twenties and thirties, beautiful women and tough-guy heroes, this is what characterizes pulp fiction and why the genre is still hugely popular in books and movies (think Indiana Jones or The Mummy).

A short search on google delivers the following definition for Pulp fiction: “Novels written for the mass market, intended to be “a good read,”–often exciting, titillating, thrilling. Historically they have been very popular but critically sneered at as being of sub-literary quality. The earliest ones were the dime novels of the nineteenth century, printed on newsprint (hence “pulp” fiction) and sold for ten cents. Westerns, stories of adventure, even the Horatio Alger novels, all were forms of pulp fiction.” This definition is also true for the average Pulp movie as they tend to be B-level films at best (although so much fun).

Last night I saw on TV a prime example of this: a 1994 movie starring Alec Baldwin called The Shadow. It really had all the ingredients of a good Pulp story. I had never heard of The Shadow. After a bit of research, I found out that he was in fact a signature hero of the Pulp period who, all cloaked in black, fought mobsters, evil scientists, crazed old men and foreign invaders with two blazing automatics and a laugh that chilled the hearts of evil. He did this from the spring of 1931 until the summer of 1949. There were magazines, radio shows, serials and movies devoted to the character so he must have been quite popular. I really enjoyed the movie though. It had it all : the locales (Warlord China, fabulous Art Deco Jazz age New York, the Archaelogy museum), an evil descendant of Gengis Khan, the requisite beautiful blonde whose father is a distracted scientist , a cool hero.

The Shadow is a really fun B-movie that I watched with a big wide grin ! 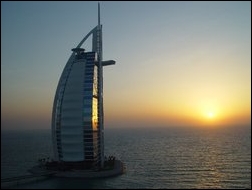 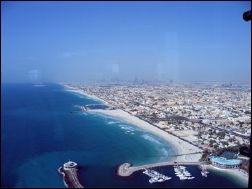 I’m in Dubaï on a business trip and had the occasion to visit today the amazing landmark hotel called Burj Al-Arab. It’s the local Eiffel Tower of sorts and is a fitting monument to the Gulf’s version of Las Vegas and biggest boomtown which Dubaï has become. Clearly very well managed and incredibly dynamic (although probably not too interested in knowing exactly where all the money is coming from or how legal it is), Dubaï is very spectacular.

And this hotel is truly incredible. The Burj al-Arab (which means “Tower of the Arabs”) was built in the late nineties and was inspired by the sail of an arab dhow (a traditional type of ship). It towers over the coastline at over 321 m and is built on an artificial island. It’s supposed to be the tallest building in the world that serves exclusively as a hotel. An all-suite hotel with 202 duplex rooms (smallest is 169 sq metres and the largest is 780 sq metres !!!), this one of the most expensive hotels in the world to stay in. But it must surely be quite an experience. Although marred by some Disneyesque elements and a little too much gold, the architecture of this place is a feast for eyes and senses and the pictures here really don’t do it justice. Even the most blasé of world travelers can’t fail to be impressed. A must-see if ever you’re in the region !!! 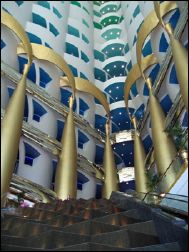 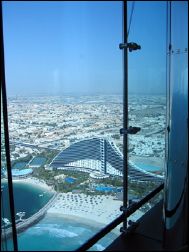 There are more images after the break. 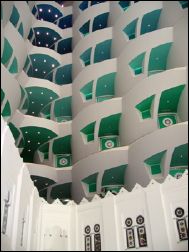 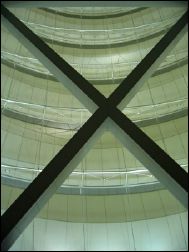 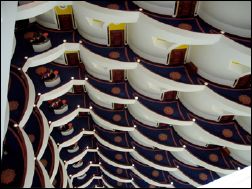 So the verdict of the Moussaouï trial is in and it will be life in jail instead of the death penalty. After the protracted and often contentious proceedings what can we conclude ?

Beyond the morality of the debate on the death penalty itself, there is a lot to be said for this trial and the way it was conducted. Due process was fairly applied and arrived at a verdict in the way the judicial system is supposed to. A potential terrorist and fanatic islamist will be put behind bars for life (a clear message to any others who might harbor the idea that this is a good career path). And the USA finally once again shows what it stands for: a moral beacon of light in stark opposition to the “dark ages” mentality of the Islamist movements.

It’s a true shame that in the immediate aftermath of 9/11 this clear moral superiority was sacrificed in the name of expediency resulting in the judicial horror at Guantanamo Bay. As is pointed out in this excellent editorial in the New York Times, the loss of moral superiority was pointless and the result of the Moussaouï trial only serves to further highlight this fact.