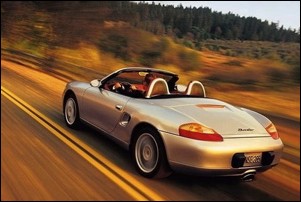 I have the good fortune of owning, for over a year now, a Porsche Boxster S (type 986). There are many qualified people who review cars on the net and I’m not going to pretend that I’m one of them (if you want a professional review, look here). I’ll just give a few comments on how I feel about the car after having driven 10 000 km in it. In my opinion, it isn’t the worlds most beautiful car (though it isn’t ugly either…). No Porsche for me is truly beautiful like some Aston Martin, Jaguar or Ferrari cars are. So looking at it doesn’t make my heart beat faster. But the Boxster is a masterpiece of very intensive engineering aimed at satisfying the driver. And what satisfaction you get … You sit in it, turn the key on the left, let the flat six come to life, put the top down (12 secs), put the very precise lever into first gear and off you go with an immediate huge grin plastered over your face. This car has driver fun written all over it. Performance and ease of use are there from the start and you’ll be hard pressed to find a faster car on a winding road. The cockpit is completely focused on driving and, though not very luxurious, it’s comfortable and practical. The car is useable (and fun) in all circumstances of modern traffic (and that includes just driving it around town in heavy traffic). It has, for the category, a surprisingly large amount of trunk space. In fact, it has two trunks: one in front, one in back (the car being mid-engined); largely sufficient for packing a week’s stuff for two. Ownership has been totally hassle-free, not one problem so far and beyond the initial expense of buying the car itself, it has proven very cheap to run (gas mileage for a car with this kind of power is very reasonable).

To conclude: for me, the Porsche Boxster is what the MG B probably was to guys in the sixties : the ultimateroadster !!! 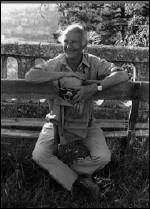 Who hasn’t dreamed one day of being Henri Cartier Bresson ? The man, whom the french call “l’oeil du siècle” (eye of the century), is widely regarded as one of the very best photographers of the 20th century. The adventurous life he led only added to his mystique. Henri Cartier Bresson was also synonymous with Leica, the famous german manufacturer, as he was always carrying at least one M-series Leica camera. His notoriety was a very big contributor in making the legend of Leica and the iconic pictures of Bresson with camera(s) could almost serve as advertisements for the brand. More after the break…

Leica, like many traditional camera manufacturers, has had a tough time of late due to the rise of digital photography. A couple of years back (and still not entirely impossible) the company almost went bankrupt. Panasonic, through a real stroke of genius, allied themselves with Leica to gain what is now much more than a foothold in the camera market (of which they were absent). Basically, Panasonic makes the camera and they use Leica optics (which are fast and high quality). They also payed significant attention to design and quality (typical Leica trademarks) which really gave them credibility.Leica, beyond their traditional range, also sell these same Panasonic Lumix cameras which they repackage under their own brand. They are however working on releasing a digital version of their enduring classic M-series camera which should be released towards the end of this year (more detailed information can be found here). This will be quite a challenge and one that I will be following with interest 😉 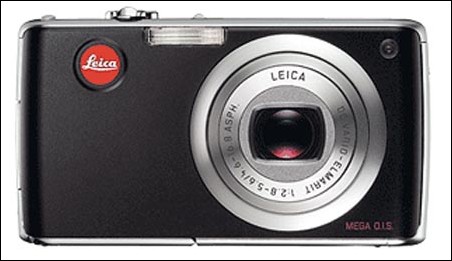 I just bought an ultra-compact camera from Leica : the C-Lux 1. It’s a jewel of a camera and I love it. You can find all the details about it here. Suffice to say that it’s fast, has a big screen, feels solid and is beautiful. The Panasonic version is called the Lumix DMC-FX01. It got a very nice review at dpreview.com (the best site for digital photography reviews on the net). I bought my Leica at Colette, the absolute temple of trendiness in Paris (who wouldn’t dream of selling a Panasonic…). The Leica did however cost a lot more than the Panasonic which I saw later the same day in another store (almost 200 €…). There was no difference that I could notice except for color (Leica is black and Panasonic is silver) and the software that comes with it (Leica comes with Adobe Photoshop Elements, Panasonic with their own software). I think that the premium I paid had more to with Colettethan Leica but to their defense, the shopping experience at Colette is one of a kind.

It’s a great little camera, I carry it with me everywhere. Every time I pull it out, that little red Leica logo lets me share some of that Henri Cartier Bresson magic. 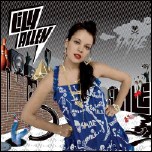 You’ve read about this album, the big Myspace.com revelation : Lily Allen. If you haven’t heard it yet, go check it out. Very cheeky irreverent catchy pop. Miss Allen is one tough cooky. I liked it instantly. It’ll be a hard album for her to follow up on though…