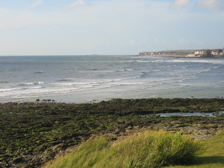 4 days ago, not having had my fill of surfing after Bali (note: I never have my fill of surfing 😉 ) and having seen on Swell-line that a storm was busy churning waves in the Atlantic, I decided to go to the nearest beaches I could find. Those happen to be the beaches of the Opal Coast : the portion of french coastline directly south of Calais (in other words, the most northern beaches of all of France). I had once been to Calais as a kid before taking the ferry to England but I didn’t remember much so the whole region was new for me (the cold water of the channel never seemed to me to be very attractive for surfing which is why I never went…). I ended up having a really good time. 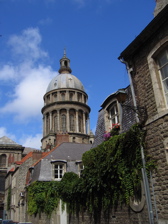 I started off my first day (thursday) at Wissant, a little village with a beautiful beach which is one of France’s most popular funboard sites. Not really a place for surfing but I had a decent session anyway (in a really rough sea) and then went to the hotel I had booked at the last minute : the Hotel du Parc in Hardelot. I booked here with many misgivings but it’s august (high season) and the region didn’t offer that much choice to begin with. I was happily surprised to find a hotel that was significantly better than advertised on their website. It’s smaller than it looks on their site and has quite a lot more charm. I extended my stay for a second night.

Friday started very rainy so I did some sightseeing (more on that later) in Boulogne-sur-Mer. Really a contrasted city with a very ugly modern part and a very nice old town. This is the place where Napoleon spent quite some staring at England and preparing his invasion which never happened. He did leave his mark on the city though and it made for a very interesting morning. With the sun’s return, back to surfing and a really good session at la Pointe aux Oies (between Ambleteuse and Wimereux).

On saturday, I spent the day visiting Le Touquet – Paris Plage, which is the major resort of the area. It has a large typical North Sea beach and a quite animated center with lots of shops and restaurants and, on this sunny summer day, a very nice ambience.

Three days in the Opal Coast. Just enough time to get acquainted… and seduced 😉

For some more info on the region, check out:

– http://perso.club-internet.fr/mvaradi/choix/opale.htm for some nice pix
– A summary overview of all the places along the coast (in french…)+ maps