Just walked out of the theater and l’m already posting my review. The movie opened today in France so this is really fresh news 😉 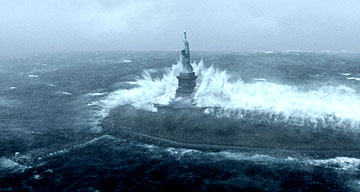 Nothing special in terms of plot but the visual effects are tremendous and the movie keeps you bolted to your chair. Compared to other disaster movies, this one fares much better in part because there is no excessive characterization. After all, when you go to see a movie like this, you’re going for the disaster. The characters are there to give a human dimension but no more. This movie, from the 1st minute, wastes no time in getting started and doesn’t let up until the end. This is a Hollywood feature that aims to entertain. It does so quite well.

A couple of additional comments :

– For those of you interested in an environmental take on this feature (after all, this film gets it’s premise from global warming) see this story on ENN : Humans, nature mix things up in Day After Tomorrow

– I’m surprised that 20th Century Fox would release such a film at this moment. Fox is part of News Corp. and owned by Rupert Murdoch (a very staunch Bush supporter). This movie is very pro-environment and critical of the USA’s actual policies regarding Climate change. It will be a hit and will contribute to putting another issue on the table for the Bush administration (and they’re already very much in trouble as it is). To sum it up, a good entertaining movie, surprising source, important issue and trouble for the Bushies. There is nothing to complain about here 😉